Brussels for Bulgaria: It is not a Circus, it’s a Menagerie

Svetoslav Terziev
The Sega Daily, Sofia, Bulgaria
The article analyses the main problem of Bulgaria in Europe - the high-level corruption - but in a way that the European Commission and other Bulgarian media are reluctant to do - by naming and shaming the most influential persons responsible for the persistence of this problem.

Commenting on the First Anti-corruption Report of the EC it interprets who could be identified in Bulgaria, although the Report does not mention names. One of this VIP figures - the owner of then powerful Corporative Commercial Bank Mr Tzvetan Vassilev reacted strongly addressing letters to the President of European Commission, three commissioners, four director-generals and two chairs of EP commissions.

As his bank was a financial basis of a media empire, he provoked a heated debate on media ethics in Bulgaria using the press under his control to attack Sega Daily. Even after the Press Complaints Commission ruled out that this article did not infringe the Ethic's Code, he tried to find EU allies for a judicial prosecution against the author. The Brussels based EurActiv wrote: "Bulgarian oligarch seeks Barroso's help to silence journalist" (19/02/2014).

Finally, the EC refused to support this attack, the CCB collapsed four months later as a financial pyramid stealing 2.5 billion Euros, Mr Vassilev escaped abroad and now is wanted by a European arrest warrant and the article raised the courage of the Bulgarian journalists.

I admit I was wrong. I had written with regard to the 13th report on Bulgaria under the Cooperation and Verification Mechanism (CVM) announced two weeks ago that Brussels was watching a circus in our country. But the day before yesterday the European Commission corrected me with a new report: it is not a circus, it is a menagerie. In the circus you see smart animals performing complex tasks. But in our country it is actually a menagerie that resists any type of control – a Jurassic Park populated with predators that won’t stop eating. Corruption has turned into a fundamental law of the Bulgarian jungle, which is being catered for (as hard as they can) by famous politicians from all facets of the political spectrum, magistrates, top managers, elite businessmen and their well-dressed protégés, middle and low-level officials and even the general population that has accepted its destiny to be constantly sacrificed as a reluctant participant in the corruption schemes. 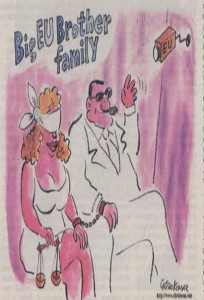 For seven years Bulgaria has been suffering in the EU because (along with Romania) it has been regularly exposed to the public eye due to high-level corruption. Just like many other predators, the country’s political and business elite likes hunting in the dark. In Europe it has been recognized as one of the most bloodthirsty elites (even more bloodthirsty that the Romanian elite) because only for it there has also been added monitoring for organized crime (besides the one for corruption). Since the times of the triple coalition, through Borisov’s cabinet and finally Oresharski’s, the authorities have been stubbornly insinuating to Brussels that it did not treat Bulgaria fairly since it was not the only country that was a breeding ground for corruption. “Look at yourselves and then criticize us!”, ministers and members of Parliament were insisting.

Their wish finally came true. During its presidency in the second half of 2009 Sweden proposed (based on the Treaty of Lisbon) the so-called Stockholm Strategy for building a common area of justice, freedom and security, which was adopted by the European Council in the spring of 2010 as the Stockholm Programme for the period 2010-2014. An Action Plan was also prepared in the middle of the same year, which required the implementation of common mechanisms in the so-far un-harmonized sphere of justice and internal affairs. In 2011 it was decided to subject all EU member-states to monitoring for corruption, which is believed to be the greatest evil because it causes damage to the Community of about 120 billion  Euros per year – approximately the amount of its budget. To that end every two years there will be a joint anti-corruption report for the entire European Union with appendices for each member-state. The first report came out last Monday and its results are cataclysmic. Forced to confess their sins as well, the Western countries, which has served as our teachers in democracy, came out of the diplomatic restraint and gave the European Commission such freedom that has not been afforded to it previously. The difference can be felt very well when making a comparison with the recent report on Bulgaria. It was dominated by the usual mysteriousness that we now as “Brussels lingo”, which avoids the direct denunciation of the culprits. In the new text it seems that the names have been on the tip of the authors’ tongues because they are easily identifiable from the first reading.

Here we see the entire menagerie that we have known since the years of transition. Please note the names that are seen through the brief descriptions of their deeds – Georgi Parvanov, who received funds from persons (the notorious businessmen Lyudmil Stoykov and Mario Nikolov) who abused EU funds under the SAPARD programme; Ahmed Dogan, “a political party leader who had received EUR 1 million as a consultant on hydropower projects, without engineering qualifications”; Volen Siderov, the “controversial” chairman of the Parliamentary Committee on the Fight against Corruption and Conflict of Interests and on Parliamentary Ethics, who had to be stripped of the responsibility for the parliamentary ethics; Hristo Biserov, former Deputy Chairman of the National Assembly, who was charged with money laundering; 16 Members of Parliament from different political parties, who took the bait of the media with the “free Vertu phones” hoax in 2010; Rumen Petkov, former Minister of Interior, who “resigned in 2008 over contact with organised crime leaders” (the Galevi brothers); Tsvetan Tsvetanov, another former Minister of Interior, who is known for “claims of mass unauthorised wiretapping of politicians, magistrates and business people”; Miroslav Naydenov, former Minister of Agriculture, who was investigated for abuse of EU funds; Delyan Peevski, “a controversial MP elected as head of the State Agency for National Security that raised concerns in Bulgaria and beyond”. He is the only one mentioned twice in the report because he is also included in the sector for the media where it has been stated that “ media ownership is increasingly concentrated in the hands of the same people (Peevski, his mother Irena Krasteva and their “creditor” Tzvetan Vassilev), compromising editorial independence”; Krasyo Cherniya, “a power broker, promising to ‘sell’ senior positions in the judiciary”; Veneta Markovska and Galya Gugusheva, failed candidates for the Constitutional Court due to “integrity challenges in the judiciary”; Vassil Bozhkov, considered the richest Bulgarian according to several rankings, who fits “a popular perception that a few companies dominate the procurement market in areas such as road construction”, and so on and so forth.

Like participants in a safari among free-roaming predators the authors of the new report have carefully noted that in Bulgaria there is “some progress in the fight against corruption on the low levels in Border Police and Traffic Police”. In other words – some insolent traffic policemen have been tamed but at what cost? “In 2011, a police officer was forced to resign after being identified as the source of media reports about donors to the Interior Ministry whose vehicles were allegedly exempt from road checks. Claims that donors to the Interior Ministry (after a journalistic investigation of the Sega Daily – a/n.) included suspects under investigation led the Ministry to introduce rules on donations and to publish an online list of donors, updated every three month”. Then the European Commission gives a warning with something like “Do not tease the animals!”: “However, no steps were taken to strengthen the protection of whistle-blowers”. Anyhow “petty bribery continues to be reported in healthcare, police, customs, local authorities and beyond.”

However, this concerns only small predators. For the others the report states: “So far, few high-level cases have reached the courts. Dissuasive sanctions for corruption have not yet been applied… Challenges remain in the prioritisation of higher-level cases”. This means that with regard to large beasts there is not even a plan with whom of those to start. Their untouchability is omnipresent, including upon manipulation of elections: “More senior organisers of vote-buying have not so far been prosecuted”, the wildlife experts from Brussels have established.

We cannot speak of a plan for the fight against corruption in a country whose government (Plamen Oresharski’s) submitted in September 2013 a programme “for the measures against the causes and preconditions for corruption” without explicitly stating the word “corruption”, the environmentalists in the European Commission are puzzled. Obviously the government is afraid to even call the problem by name because it is a part of the problem. “According to the received data the organized crime in Bulgaria uses protections by means of corruption in the public administration, the judicial system, the police and customs”, the report has stated. It cannot be otherwise since the food chain is controlled by criminals: “organised crime continues to exercise influence in the economy”. That is why “in Bulgaria there is no regulatory framework with regard to lobbying”, “the prosecution of corruption and organised crime is obstructed by flawed pre-trial investigations, procedural delays and dismissal on technicalities.”, and “the attempts to adopt a code of ethical behaviour of the Members of Parliament failed”.

Since one can see these appalling facts with the naked eye from such a great distance, what can one see when having a closer look at the bushes? “Smaller towns face particular risks of organised crime infiltration, linked to a combination of violence, threats and collusion with local politicians and law enforcement, and concentration of economic power”, the political zoologists write. In their opinion “Such risks have direct implications for the ability of local authorities to carry out impartial and transparent procurement”, which means inevitable predatory plundering of social wealth.

In their attempt to drive foreign observers out of their hunting fields Bulgaria authorities were exposed to the public eye twice. They believed that the European Union will terminate its special monitoring on them under CVM by introducing a common control mechanism for all countries and after that, against the background of the universal sins, our country’s own thievery will not look as a unique event in the European Union. Our government has relied on its experience in the Council of Europe, where a procedure for monitoring of all newly-accepted countries was introduced because of Bulgaria at the end of the 1990s, and then a procedure for post-monitoring was introduced again because of it at the beginning of the new millennium, and later the inspections were expanded to the older member states.

However, as our country has remained the perpetually monitored party (the usual suspect), the European Union also has the chance to immortalize the monitoring on itself because Brussels has warned that even if the procedure under CVM is terminated someday, the new anti-corruption procedure will not be limited in time. If until now Bulgaria was being compared only with itself (and to a certain extent with Romania) when reporting progress, in the future it will have to consider the advent of general intolerance towards corruption. New rankings are under way in Europe, in which our country leads by 13 laps – the number of official reports after 2007 that have presented the country as an example for corruption in the European Union.

Share “Brussels for Bulgaria: It is not a Circus, it’s a Menagerie” on: