by Iván Zsolt Nagy
published by hvg.hu, Hungary
share
How long does it take for the historical trauma of a nation to become a part of memory rather than a political factor? How does this manifest itself in an individual’s life, thinking, relationships? What if we see something differently than our fathers and grandfathers? The theme of this opinion piece is the greatest drama of Hungary and the Hungarians in the twentieth century: the Trianon Peace Agreement. It was signed 100 years ago, but many still can’t or don’t want to get rid of its impact. Zsolt Iván Nagy was born and raised in Romania as a member of the Hungarian community in Transylvania but he has lived in Budapest for years. However, this article takes him back to Transylvania, to family, friends, Hungarians and Romanians.

One hundred years and one day. This article was intentionally not written for June 4th. It did not intend to insult anyone, nor interfere with anyone’s commemoration. But I did want to get it out.

I was raised so that for a long time I believed I must feel pain because of Trianon. We did not talk about it all that often; thinking about it, it would get mentioned once or twice a year, and even then it was accidental, perhaps as part of some old story. But it was there, in our environment and surrounding us in our home in Transylvania, and later in Partium.

Our family is a Transylvanian middle-class family in the classic sense, with one branch from Nagyenyed and one from Nagybánya, with grandparents born before 1920. One grandfather read law, the other engineering, and the grandmothers, having completed their secondary education, looked after the household, raised the children and kept the family together. There were loads of books in both homes, they played cards, travelled, and occasionally just sighed. And they had principles. One side was strictly Catholic, the other more secular Calvinist, where on the odd occasion one or another theology teacher or pastor would make an appearance, without anyone thinking too much of it.

Yes, for a very long time I believed that Trianon must hurt

But manners were extremely important. Once, as a three or four-year-old, I got up from the table during lunch, and my grandfather’s voice caught up with me before I reached the yard. I did not ask for permission, so I had to drag myself back. He was a strict man with a quick temper. One of those two thousand or so intellectuals in South Transylvania who were dragged away by the Romanian authorities to the Zsilvasar (Tirgu Jiu) camp and kept there for several months. They had done no crime other than that they were Hungarians, and they were able to stand up for their rights.

My father was the proper son of his father. He too wanted to become a lawyer, but with his background he would have had no chance of getting admitted. He became a teacher, and at the university he was dragged through mud, but that did not extinguish the explosive organiser and cynical intellectual in him.

I simply respected my grandfather, but my father I worshipped. When he told a story, I never forgot it, when he handed me a book, it was not even a question whether I would read it.

And, he was guiding me. Sometimes with Hemingway, then Hasek or Miklos Banffy, or even Albert Wass, whatever he saw best. And me, as just a 15-year-old from Partium in Ceausescu’s Romania, I seemed to have understood why I had to read “Sword and Scythe”. 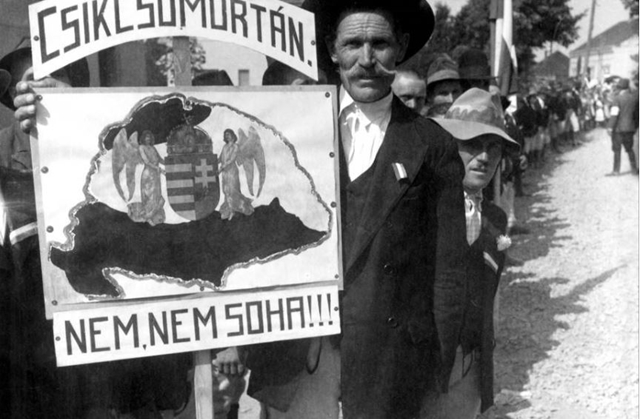 Yes, for a very long time I believed that Trianon must hurt.

At least, it seemed for some time that I was raised to feel that pain. But later on, I actually realised that this was not the case. That it is not the trauma of Trianon they had passed on after all.

Perhaps my grandparents, yes. They lived through Trianon, they were old enough to understand and to experience the direct consequences. They were torn away from their relatives in Budapest, they had to learn to live in Romania, to attend university in Bucharest, instead of Budapest, and to become a minority having been the majority.

My parents’ situation was different. My mother was born in 1943 in Nagybánya, again in Hungary, but by the time she would become more conscious, she was a Romanian citizen. My father, born in 1940, experienced it, yet again, differently. He was born in Romania, and lived there until the end of his life. He had only heard stories about Trianon, he did not experience it, although a mere 20 years passed after Trianon until he was born, these stories were still very vivid. However, the wrongdoing that affected him did not spring directly from the dictate, but from the melange of post-war madness, nationalism, grief, thirst for revenge, frustration, and poverty. Added to this was the still recurring memory of Trianon, though somewhat more distanced, but the Second Vienna Award much closer, and also the psychological and physical devastation of the spreading of a violent ideology. “His crime” was that he was Hungarian, but differently than it was in his father’s case.

No, I was not brought up to be obliged to feel pain

As for me, having been born almost fifty years after Trianon, this was now all just history. And history evokes respect; it might make one feel disappointed, even angry, or in a better case it can educate, but actually it does not hurt. Perhaps one can believe this is the case, however it would require someone who would intend one to believe it – either because he too was made to believe it or because he had his own selfish agenda.

No, I was not brought up to be obliged to feel pain.

I was simply raised as a Hungarian Transylvanian, who does not forget Trianon, one who does not forget what his family endured, but one that does not hate every single Romanian as a knee-jerk reaction, and does not accept every Hungarian unconditionally. I was used to seeing my grandfather caring for the cases of his Romanian clients just as much as for those of the Hungarians. And my father became a Romanian Litterateur and would hand me Rebreanu and Cosbuc as much as Bánffy or Albert Wass. I was encouraged to learn Romanian perfectly, but I was also conditioned to quite literally go weak in the knees when in 1981, at 13 years old, I saw for the first time a freely flying Hungarian flag as the train chugged with me for the first time across the border. 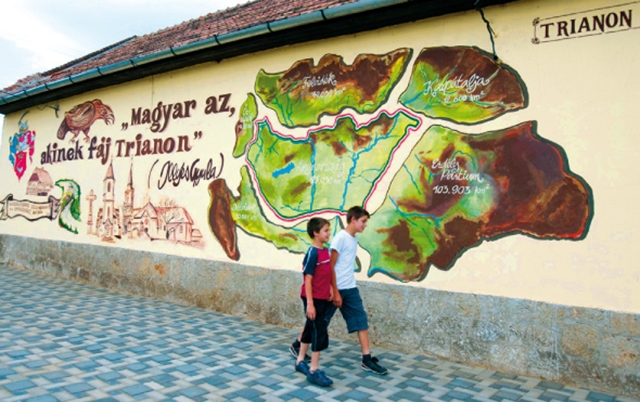 Is this nationalism? In a certain sense, yes. It is different from that of my parents’ and very different from that of my grandparents. It could perhaps be called a sort of open nationalism, or even some kind of national awareness with a liberal approach. Something that reflects the time and the environment where one lives, the distance in time from the historic events, the being a minority, but also by being surrounded by an utterly mad version of an insane ideology, the system of Ceausescu. When it is not the Romanians you hate but the communists, and since more amongst them are Romanians, the two blend into each other sometimes. When the reason you are not rooting against every Romanian team in every sport is not because they are Romanian, but because of the force with which the powers shove their expectation into your face (also quietly noting: in the same way as the Hungarian public service and pro-government media does today). Or when you would not necessarily fall into a trance by listening to Istvan, a kiraly (Stephen the king), but because you are only able to listen to that tape hidden away in the back rows of the bookshelf on the lowest volume to avoid being reported, then suddenly you become a convert and sometimes you hum nothing else for weeks. When there are people who expect that you would never go out with a Romanian girl, but you know perfectly well that this is not because you would not like any of them or that you would be deterred by their nationality, but because the barrier is inside you: you love in Hungarian.

And all the while Trianon clearly does not even cross your mind, and why should it – that is not your pain.

In actual fact my own attitude to the national feeling was bothering me. Especially after 1989, when as a twenty-something year old student I was immersed in the Hungarian student youth and political organisations in Romania, where once again, national exclusivity was way too often an expectation. 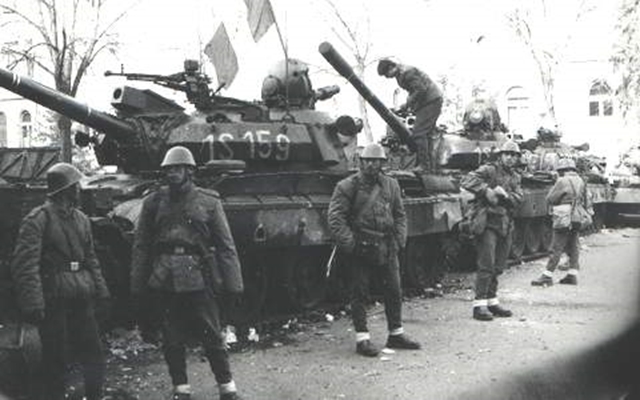 And this communal atmosphere of course also included the disappointment that at the beginning of 1990 the illusion of reconciliation disappeared in a puff of smoke within weeks, and there was the March of Marosvásárhely (Targu Mures), there was Funar, Iliescu and the other extremists.

But there was also frustration mixed with pridefulness, perceived cultural superiority and national romanticism, and feelings from the soul, with the emerging political interests of individuals and groups.

I found solace when I came across for the first time and immediately identified with this phrase by Miklós Mészöly: “I perceive my being Hungarian as a pleasant accident”.

This is when things fell into place.

It pleases me. I am not more nor less just on account of being Hungarian, but that is fine just like that – and there are numerous reasons I can list for this. From Nagyenyed (Aiud) and Nagybánya (Baia Mare) through Szatmárnémeti (Satu Mare) and Temesvár (Timisoara) to Budapest, from Kányádi to Esterházy, from Bartók to LGT.

But it is an accident, and it does not oblige. I am no less Hungarian if I don’t want to holiday in Székelyföld (Szeklerland) but on the Italian riviera, if I believe that any democrat is better than a Hungarian despot, if I believe in the EU and not in the nation state, if I do not stand up when I hear “Nélküled” (Without you) as I find it awful and especially do not consider it to be an anthem.

And I am no less Hungarian when Trianon does not hurt or not the way it is expected to. As yes, hurt it does. But I am not lamenting the territory and the geographical or political grandeur, but the people and fates. Just like the ones affected by the holocaust, the victims and refugees of 56, or all of those who were snitched on by Kádár’s agents and were crippled by their regime. 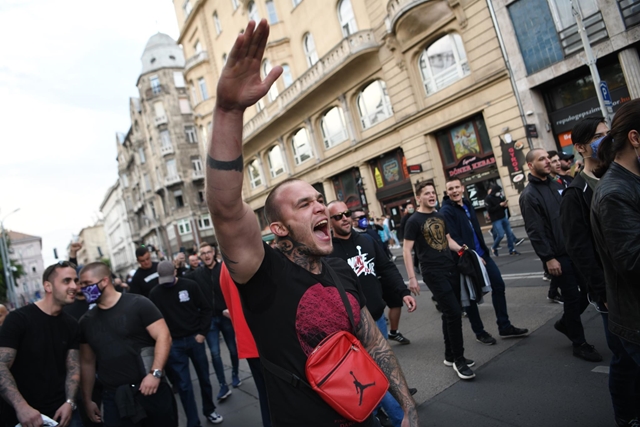 What’s more – my real Trianon is when, with the greatest love, I am trying to convince my only child not to come back from his British university to László Kövér’s ideological shambles, not to the darkness of the CÖF (Civil Cooperation Forum), not to the country where protesters are beaten apart, then the black clad groups with their distorted faces are permitted to wreak havoc in Deak square, while the Roma of Gyöngyös become the subjects of political shooting galleries.

If something hurts, then it’s this.

This article was intentionally not written for June 4th. It did not intend to insult anyone, nor interfere with anyone’s commemoration. Everyone must interpret Trianon for themselves. My father and my grandfathers would be, I am sure, of different opinions, but I believe they would understand me.