We were proud to welcome award-winning French journalist Natalie Nougayrède to the 2019 Award Ceremony of the European Press Prize in Warsaw, Poland, which took place on May 23.

Natalie Nougayrède was the first woman to head the French Le Monde as executive editor in 2013. She is currently an editorial board member and columnist at The Guardian, as well as the editor of its Europe Now series and This Is Europe newsletter. She writes about international and European affairs, with a focus on security issues and human rights.

Read her important speech titled ‘A New European Journalism’ below. 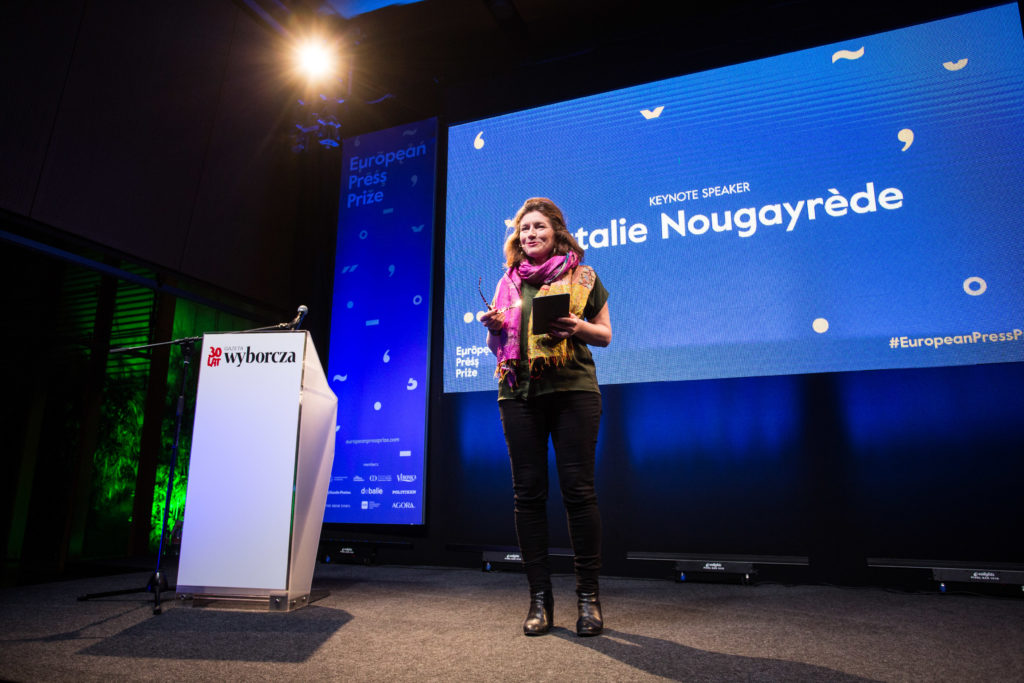 “We all know that a free media and quality information are the lifeline of a democratic society. Everyone in this room knows that very well, as we sit here in the building of Gazeta Wyborcza, a newspaper created 30 years ago in the midst of trailblazing transformations in Poland, and the revolutions of 1989, which changed the face of Europe. We are here at the European Press Prize ceremony to reward brilliant journalism from across Europe and to show support for Gazeta Wyborcza, a pillar of fearless journalism.

I would like to share two thoughts with you about journalism in Europe today. The first is that these are critical times for journalism in our part of the world. The second is that there is also hope, and that the best way we can build upon this hope is if we approach things together, as a continent, not just as individual nations.

It is not difficult to see why these are critical times for journalism in Europe.

There is the economic crisis of the media, whose business model has been upended by the technological revolution and violent losses in advertising revenues. In part, the solution to this will surely be to regulate the big digital platforms, and this is something Europe can do.

There is the reign of unsubstantiated opinion, rumour, and conspiracy theories. In order to exist, democracy requires a commonly accepted set of established facts. Yet we are under the assault of junk content, both online and on social media. Just yesterday, a report came out documenting how fake news spread by far-right Facebook pages has been seen 533 million times in Europe in the last three months, during the run-up to the EU elections – that’s six million times per day. I like to compare this to junk food. In the way junk food damages our health, junk information poisons our societies. And part of that poison serves to discredit the work of journalists and instil doubts about their reliability. Trust seems to have become a rarer commodity, but it is exactly what we need before we can debate anything meaningfully.

There’s also the situation where our continent has become the target of deliberate, systematic and massive disinformation campaigns fostered by external actors, often relayed by like-minded or complicit networks within Europe. We need to protect our public space. Saving quality information for all is not just a question of democracy, it is a question of European sovereignty.

Last but not least, there are the growing threats to media freedom within Europe: governments and power networks are trying to censor or take control. Last month, in its annual report, Reporters Without Borders wrote that threats, insults and attacks “are now part of the occupational hazards” for journalists in several countries; and the frightening development of murders of investigative reporters, in Malta, and in Slovakia, “have made the world realise that Europe is no longer a sanctuary for journalists”. The Council of Europe’s media freedom watchdog this year said: “press freedom in Europe is more fragile now than at any time since the end of the Cold War”.

There is still hope in these critical times.

Collaboration. If we journalists find more ways to collaborate across Europe, take innovative steps to build a good network across the continent, and secure a common space for quality information, we’ll get closer to fulfilling our mission. That mission is to help citizens become “conscious” actors, rather than masses in a trance, and to make choices based on facts, rather than “emotional suggestion”.

Awareness. Awareness means mobilisation, and it means efforts to find solutions and counter dangers. We’re learning as we go along. Remember, Facebook only started to grow its international reach in 2007, and only recently have we taken the full measure of its impact. It is precisely the efforts of investigative journalism, with the Cambridge Analytica revelations, that have made us aware.

There is also the awareness that we need to break out of our bubbles, and our national silos. There is an increasing need for us to think of ourselves as European journalists; not just as French, British, Polish, or Greek ones, no matter how important those identities may be. This is what the European Press Prize is all about.

We need to go further and think about a new European journalism, and how a digital news platform or a collaborative network of journalists across the continent could one day come into being. Not only would it strengthen quality journalism, it could also contribute to building confidence and better understanding by helping to heal, not amplify, our continent’s divides.

The need for a European platform of journalism

Europe is a patchwork of countries, languages, cultures, and contrasted historical experiences.

Today it’s become commonplace to talk about fault lines crisscrossing our continent, but it’s also important to think also about how we are interconnected in unprecedented ways

And yet, there is one thing we do not have: a common pan-European media. A media that is created from the grassroots by Europeans from different countries, to serve citizens across the continent.

What if we could imagine something different: a genuinely pan-European public interest news media platform. Produced by a team of European journalists, the platform’s mission would be to cover Europe in new ways, in ways that do not centre around nations, but instead tap into the participation of citizens across the continent. Can we imagine that such a platform would be created in a non-profit spirit?

Perhaps you think I’m a dreamer, but I urge you to look around; some of this is already happening. European journalism is full of interesting multinational initiatives, and a new pan-European media scene is tentatively emerging before our eyes.

There is the Europa Project, which Gazeta is part of, and the Europe Talks Initiative. There are cross-border networks of investigative journalists, such as Correctiv and Investigate Europe. There is the DataHarvest annual conference, which Brigitte Alfter has described as “the European editorial meeting”. There is Reporters in the Field, which awards grants to multinational teams of journalists reporting on cross-border issues. Politico.eu was launched in 2015, with a focus on the Brussels institutions. Others like EUObserver, VoxEurop, EurActiv, share that spirit. Newcomers include Are We Europe, and Eurozine which focuses on culture and intellectual debates. 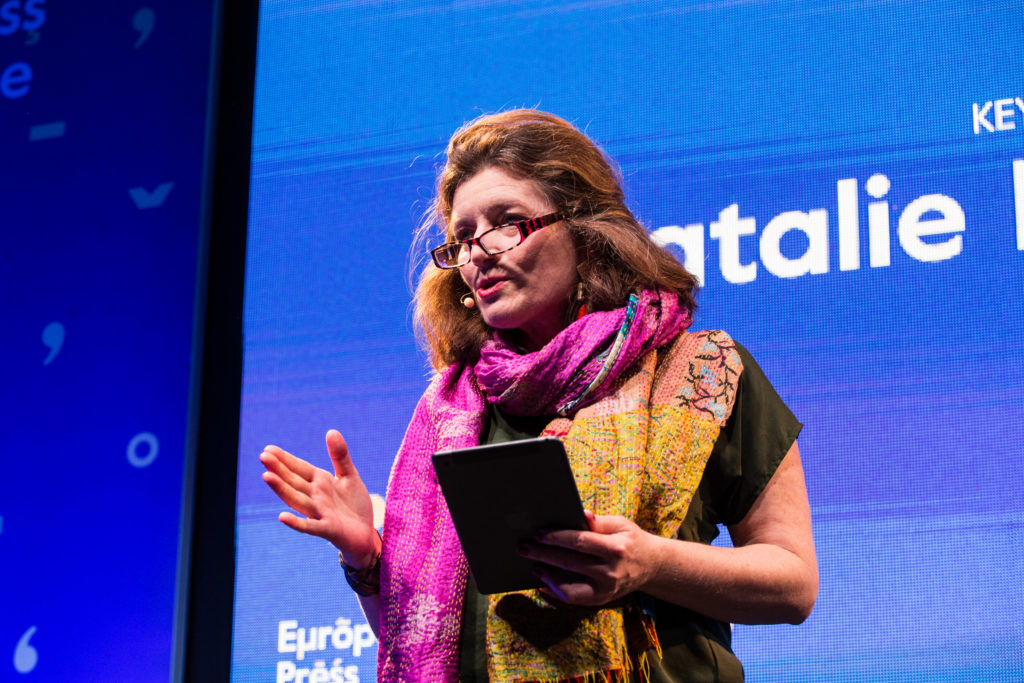 The list goes on, and it shows that something creative is happening in European journalism, proving that there is an appetite among journalists and the public alike. None of these initiatives existed ten year ago. They are pioneers.

Can we go further than what already exists? Could we create something even bolder? Something that would burst some of the bubbles we live in and be genuinely European-created, designed to connect citizens across the continent.

Quality information is a public good. It is like clean air, safe housing, or good infrastructure. There is no lack of funding for propaganda, so can there be a business model for truth?

Together we can create something new in European journalism. The answer depends on all of us. We have the power to do something as editors, reporters, developers, fundraisers, philanthropists, and concerned citizens.

The first step is to think about it. There is plenty of talent in this room, and there are plenty of people who care about quality journalism and democracy in Europe. Now is the perfect time to try to shape the future of our information environment in Europe.

Tonight we are paying homage to the brilliant work that is already being done – work which the nominees and the winners of the European Press Prize illustrate so powerfully. A new European journalism is truly the way forward.”