An interdisciplinary team of journalists, physicists and machine learning experts developed an app and a sensor to measure whether cars keep enough distance to cyclists in the city, according to official standards. 2500 readers volunteered to help gather relevant data in Berlin. The result is an interactive story guiding readers through large amounts of data in a playful manner. 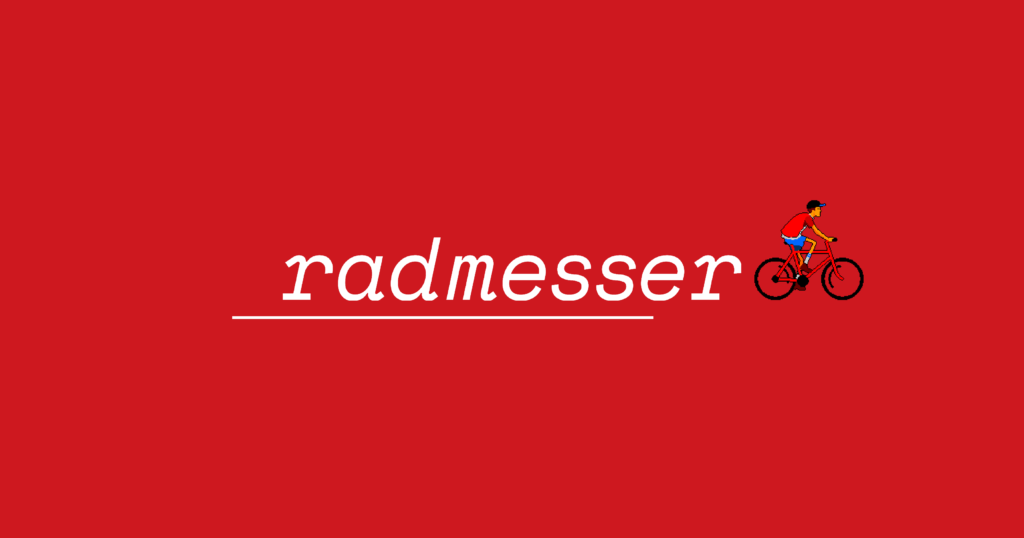 If you ask people why they are scared of cycling in Berlin, one of the most common answers is that they are afraid of cars passing them by too closely. Even though there are legal regulations on how much distance cars need to keep when overtaking a cyclist, there is no law enforcement and no data on that matter in Germany.

“Even though there are legal regulations on how much distance cars need to keep when overtaking a cyclist, there is no law enforcement or data.”

The goal of Radmesser’s team was to change this and add some hard facts to this often very emotional debate. In an interdisciplinary team of journalists, physicists and machine learning experts, they developed an app and a sensor that is able to measure those distances between cars and cyclists. 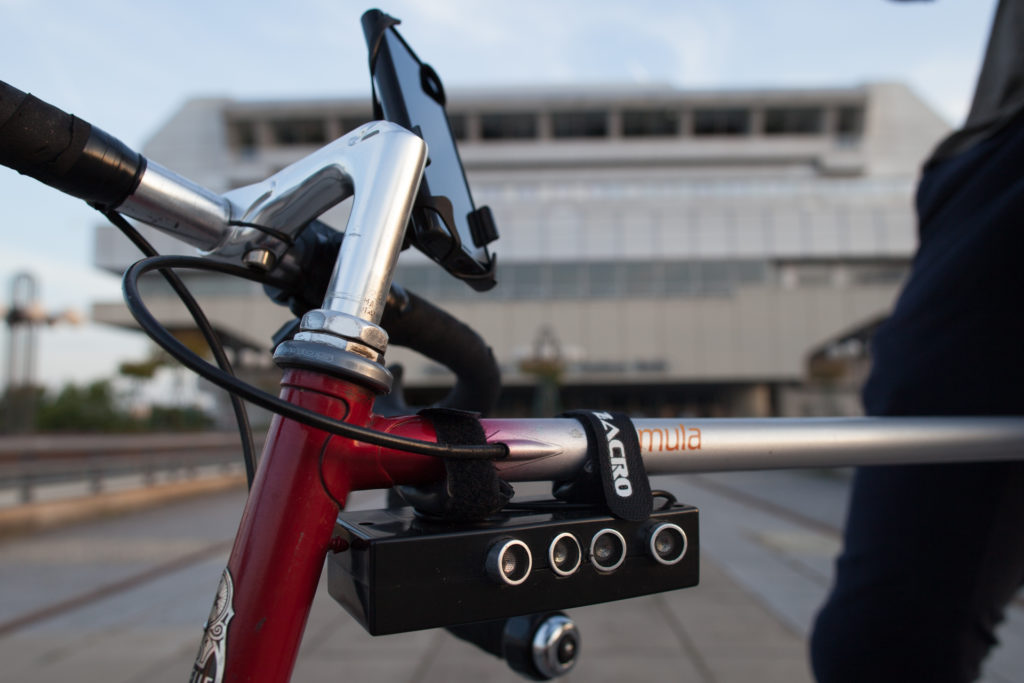 Photo: The Sensor. Distance monitoring device being fixed to the bicycle frame. Using ultrasound it measures distance to the left and right and transmits the data to the smartphone which is mounted to the handlebar. Photo credit: Hendrik Lehmann.

They built 100 of these sensors to distribute them among 100 readers to participate in the research project. The project was presented through in an interactive “Swipe story”, a format especially developed for this investigation.

After the first measurements were published in August 2018, the story went viral and 2500 readers volunteered (the full article is listed below). The selection was made using an algorithm in order to select test riders as diverse as possible from different postcode areas, cyclist types and age groups.

The participants cycled through the whole of Berlin for two months and gathered data on over 13.300 kilometers, recording 16.700 overtaking maneuvers by cars. The analysis of the data, employing methods of computer vision and machine learning, delivered shocking results: The overall majority of all overtaking maneuvers was closer than the allowed 1.5 metres. And it showed that much of the existing cycling infrastructure does not really help to keep cyclists safe.

This chapter has been translated to English for the European Press Prize. View the full interactive project here (in German).

The publication of those results was picked up by diverse media outlets in Germany and triggered a nationwide debate on the safety of cyclists that has even reached the German parliament.

Project Radmesser combined classical reporting with data journalism, citizen science, polling and innovative technologies such as machine learning and the hardware development of own sensors. The project was funded by the “Medieninnovationszentrum Babelsberg”, which supports new and innovative ideas in journalism.

This is the original story that was published in print by Tagesspiegel and was one of the publications that went viral in August 2018, after which 2500 volunteers signed up to help gather the data for the project.

Failure to keep a distance when overtaking can cause accidents and is one of the reasons why many hesitate to use a bike. Few drivers keep to the rules. A test ride with a distance monitor that we developed ourselves

It is Tuesday morning, 10.35 a.m.  The thermometer already stands at 25.5 centigrade. A 29-year old man has stopped his red bike in front of the Radio Tower in Westend. Two young guys, waiting to clean car windows at the crossroads, are watching curiously as he first straps a small plastic box to the bicycle frame and then fits his smartphone and a small camera to a mount on the handlebar. The two window cleaners come closer: “And now you’re going to, like, film the whole thing?“ “Yes“ replies the cyclist, and then he is off. Heading east, 10 kilometres right across the city to Kottbusser Tor.

The objective: to monitor how close cars get when overtaking cyclists on the road.

The reason: the volume of data, statistics and analyses that is to date available on cycle traffic in Berlin shows a dangerous deficit.

The deficit is that of the safety of cyclists in flowing traffic. What the Senate’s monitoring stations record is merely the number of passing bikes. Accident statistics only document data when it is too late: a relatively constant number of seriously injured or dead cyclists over the years, who are remembered along the roads through white ghost bikes. There are no hard facts relating to the actual behaviour of drivers towards cyclists on the road. According to Berlin police “no specific spot checks are carried out in this respect as part of road safety checks. There is no valid data available on the number of infringements.“ 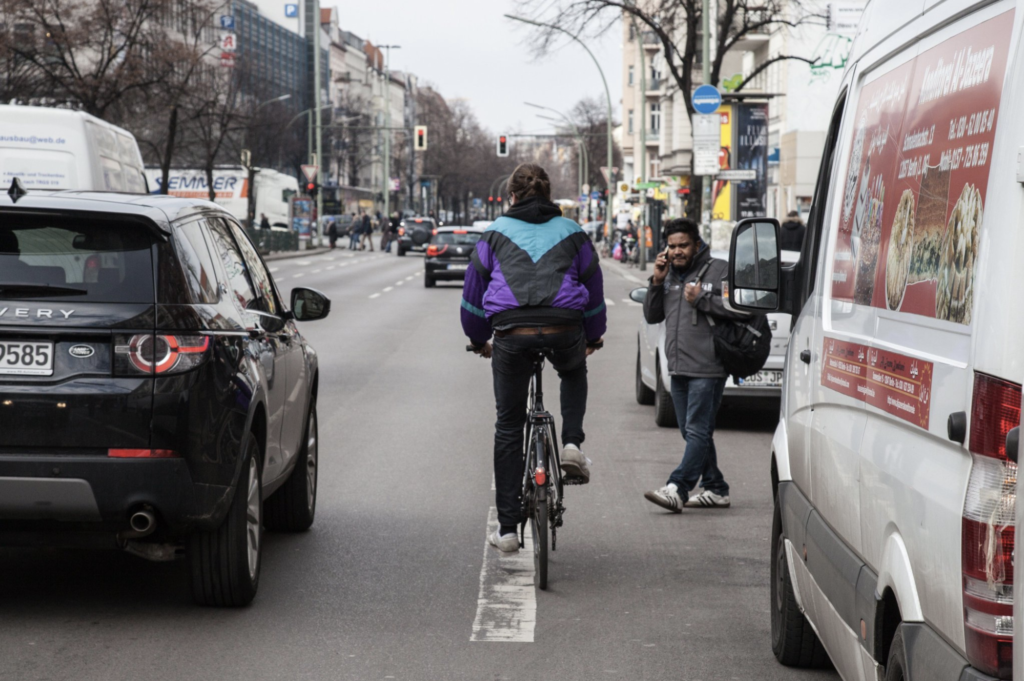 The Experiment. Michael Gegg of the Tagesspiegel data team making a start. He rode 10 km from the Berlin Radio Tower to Kottbusser Tor, with the distance monitor mounted to his bike. The Outcome: he was overtaken by 123 vehicles, in 50 cases at a distance of less than two metres, 34 times at less than 1.5 metres. And four times they came to within less than one metre.
Photo: Hendrik Lehmann.

Until today, that is. For three and a half months Tagesspiegel editors have been working together with physicists, programmers, experts on artificial intelligence and designers to address the problem with their Radmesser monitoring project. The team has constructed a sensor, which can measure not only the distance that cars, HGVs, busses and scooters keep when overtaking cyclists, but also how close the cyclist gets to parked cars. And the monitor records the location of each overtaking manoeuvre.

The result is the small black plastic box that the cyclist was strapping to his bike. His name, by the way, is Michael Gegg, and he is one of the riders of the Radmesser team. Off we go.

Past the problem-ridden ICC he cycles down Neue Kantstrasse. As soon as he has got across the bridge spanning the A100 the bus lane comes to an end, and a green pickup races past. Overtaking distance: 1.02 metres. There is no traffic on the other side. The driver could easily have changed lanes. 270 metres further on, a black Golf with rear spoilers overtakes at a distance of 1.28 metres. That one too would have had enough space to leave more room.

The rules are clear enough: “Drivers of vehicles overtaking cyclists must keep an adequate distance, taking into account the cyclist’s way of riding and the speed of their own vehicle, and which must be no less than 1.5 to 2 metres“ the Berlin police informs us. This distance requirement has been confirmed in court cases, but is not laid down in the Highway Code. The mandatory distance also depends on the condition of the route and the cyclist. In case of elderly cyclists the requirement is greater.

Our cyclist being young, 1.5 metres is the minimum. His brief is defensive riding along the entire route. On the right, just before the crossroads of Neue Kantstrasse/Trendenburgstrasse there is a DHL van, double-parked. So, after indicating by hand signal and a bit of a wait this cyclist overtakes the van on the left. The car behind does not wait for the bike to get back into the right hand lane.

Why focus on overtaking distance? The city centre now has more households without a car than car-owning ones. Cycle traffic in the city has been increasing steadily since 1972. If you ask pressure groups and your average next-door Berlin resident what they see as the greatest danger while cycling you will invariably hear: cars overtaking at close distance. “It simply creates fear in people“, says Lara Eckstein of the ADFC cycling association: “Lack of distance makes people feel unsafe on the road and that is why many do not find the courage to use a bicycle.“ And it is not just a threatening experience, it can also lead to cyclists riding too far on the right, too close to parked cars. This in turn increases the risk of accidents when car doors open without warning. Or they break the law by riding on the pavement and endangering pedestrians.

But is this really a mass phenomenon, or is the public mood being whipped up against drivers by the cycling lobby? And how is it linked to the design of road layout and cycle paths? The purpose of the monitoring project is to counter the emotional traffic debate with facts.

Back on track. Onwards onto Kantstrasse. Traffic is heavy there, which is not a new phenomenon on the West Berlin cycle front. Not that it has prompted anyone at the Berlin traffic department to introduce cycle paths here though. An analysis of the cycle path data available to Berlin authorities shows that Kantstrasse with its 2.6 kilometres length has all of 38.4 metres of protected lanes for cyclists. Now that the Senate has promised to make the city more bike-friendly under its new Mobility Law, could it be that the road may actually get new cycle paths?

It is not so easy to find out. Over the past three months our researchers have repeatedly asked the Senate at what locations in Berlin they have plans for pro-cyclist measures. The Senate pointed to general overviews and to the city districts. These were all approached – several times. While Friedrichshain-Kreuzberg for instance sent a detailed overview right away, showing 59 planned projects, other districts do not have a clear idea at all of what their plans are. Charlottenburg-Wilmersdorf states that the district has “no plans for new cycle paths at present“. But according to a formal parliamentarian request for information by deputy Joschka Langenbrinck (SPD) there are plans after all for cycle traffic measures for Kantstrasse in 2017. Expected cost: 487.90 Euros. The district did not reply to more detailed questions as to what the plans entail.

The following drivers keep more of a distance. Shortly after Savignyplatz there is a double-parked diplomat’s car. And unfortunately the nice new cycle path outside the Waldorf Astoria is usually taken up by parked vehicles. Neither of which comes as much of a surprise. On Tauentzienstrasse it takes less than two minutes until a taxi driver speeds past at close quarters. Overtaking distance: 1.08 metres. Another taxi driver is about to do the same just before Hallesche Tor. Before that, the cyclist is overtaken by a pack of busses that are wending their way along Tauentzienstrasse. The first one goes ahead at 1.14 metres. The lane to the left is empty. Two drivers of the BVG Berlin Transport busses that follow also overtake too close. BVG #becauseweloveyou? Try again.

Then, finally! Starting from the Urania building there is a separate cycle path. Unfortunately it is so bumpy that it feels more like riding a horse than a bike. And the next cycle path, on Kurfürstenstrasse, is hardly visible. It terminates in front of a tree. There are no improvements planned here, either. Still, taking information from several sources, Tempelhof-Schöneberg apparently wants to implement 30 measures. That could take time. Christiane Heiß (Green Party) of the district council warns: “there have been unrealistic expectations, in my view, that road construction measures would be implemented within a year. I can only point out that in the building industry they typically work with planning and implementation timeframes of three to ten years.“

This is where we take a shortcut: Michael Gegg continues toward Kreuzberg district. Things are not getting any better. The finale takes place at Kottbusser Tor. An ambulance, no blue lights or sirens, whooshes past him with a distance of 1.22 metres, shortly before a van overtakes him with 58 centimetres distance, setting the track record.

Summary: along the route the cyclist was overtaken by exactly 123 vehicles. 50 of them kept a distance of less than two metres, 34 overtook at less than 1.5 metres. And four came closer than one metre. Most of the route is not included in any improvement plans.