The Mystery of the Secret Funds—and—Who are you Fooling?

The Mystery Of The Secret Funds

The discretionary fund, of which the purpose and detailed expenditure is known to nobody except the Prime Minister and a narrow group of bureaucratic staff, is being spent from the revenues of the general budget. (The access limit is up to 5 per thousand.) It is financed by our tax payments to put it clearly. Therefore, even though the law prevents us from asking how exactly it is being spent, everybody still reserves the right to expect a fair and equitable relationship between budget revenue and the discretionary fund expenditure.

We may be waiting, but let us look at what is going on…

The following chart I prepared thinking it would reflect the relationship between budget revenues and the ten-year expenditure of President Recep Tayyip Erdoğan, who began to use the discretionary fund as a prime minister in (March) 2003 until the end of the year 2013, can give us a significant idea:

(Note: there is no mistake in the discretionary fund stated as million TL, and budget revenues in billion TL. The currency units are based on the growth rate.)

Let us proceed to the total sum of expenditure from the discretionary fund during Erdoğan’s governing period. The amount he spent from the discretionary fund during 11 years, between 2003-2013, is 6.355 billion TL. (Data for 2003 and 2004 were taken from the Prime Ministry’s budget, other data from the Ministry of Finance.) When we add this year’s amount of 738 million TL in eight months, which includes the costs of the presidential elections in January and the month of August, the total expenditure from the discretionary fund reaches 7.093 billion TL. 7 billion for which nobody can be held accountable… But do you know what is even more troubling than this picture? The fact that we will be paying the legal interest over the money that was found and confiscated one year ago in the house of Barış Güler and Süleyman Aslan, because it will be returned tot them. Enjoy your 2015 budget. 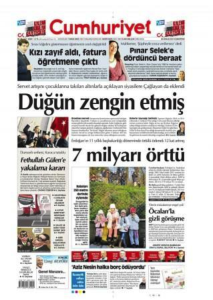 Who are you Fooling?

Finally it came out.

The regulations, explaining how the Treasury will assume debts of the huge infrastructure projects, were published in the Official Gazette last week.

The financial risks involved in these projects, which reach a significant amount of costs when listed, will be carried by the Treasury in case problems occur.

The so-called “problems” meaning when a company or public authority terminates the contract for any reason, the Treasury will have to pay back the loans to the bank that was chosen by the company to finance the project.

But there is a trick…

The risks involved in this system, which puts the Treasury under a great burden if things do not go as planned, are hidden from the public.

Even the fact that it is not named “Treasury guarantee” but “debt assumption” in order to hide it from the records, proves this.

The system of putting the public “to sleep” works as follows:

– The prerequisite is that the project costs at least 500 million TL. The third bridge, the third airport, Canal Istanbul, the bay infrastructure and all of the high-speed train projects are designed by the Public-Private Partnership (PPP) or build-lease-transfer model. For those who do not know, the projects seem to be entirely built by the private sector.

– Meanwhile the rules never change on the other side. Creditors want to see the Treasury as a counterpart, before handing out any money to the projects of the companies knocking at their doors.

– The Treasury will also activate the “Assumed Debt Mechanism”, which was added to the law in December 2013 and its regulations were published over the weekend.

– The Treasury will not have provided a “guarantee”.

– The politician will have said “I do not guarantee that”.

– The creditor’s (bank’s) business will have been taken care of.

What that business is? To be able to get back its money under any circumstance, if problems were to arise in the future.

In fact, the assumed liabilities which are named “financial risks”, are normally supposed to appear in the Treasury’s record.

However, this list that reaches a magnitude of billions of dollars in investments, does not appear on the state’s liability portfolio.

Simply put, the Public-Private Partnership model is based on the assumption that the economy will grow endlessly.

Indeed, in a successful economy, it would be unfounded to await hardship considering these projects. But when things turn around for the worse, the magnified debt of such a large inventory of projects reaching a “snowball” effect is not excluded as a possibility.

The ones remembering the Yuvacık Dam will know. Sometime ago, that build-operate-transfer project which was backed by the Treasury, caused a lot of suffering.

As a result, after the 2001 crisis, the abolition of the Treasury guarantee was the right step to take. The return of this guarantee years later, forms a great risk for the economy.

Deceiving the public with fantasy names does not change the nature of these risks.

Would a Prime Minister contradict himself?

But it happened… Look at how: the Treasury became a guarantor for the infrastructure projects over the weekend, with the “Assumed Debt Regulations”… This “guarantee” is based on a Cabinet decision and therefore contains a signature underneath it by the Prime Minister. The date is March 6, 2014. After this fact, let us inform you about the date of the opening quote: March 8, 2014. This means that the Prime Minister signed the agreement, stating that the Treasury will pay for the bank loans in case the contract of the third airport is terminated, two days before he said that “not a penny is being spent from the state’s pocket.”

Call it “corporatocracy” if you like. Although, this concept explaining “an economical and political system controlled by corporations”, suits our situation very well(!). If we choose our own history, the amount of debt assumed by the Treasury with these regulations, is reminiscent of the administrative style in the Ottoman Public Debt Administration era.
When you add Canal Istanbul to this, which has not yet been contracted but will cost “12 billion dollars” as pointed out by the Prime Minister, the amount within the scope of “Assumed Debt Regulations” reaches 80 billion dollars for now.

To repeat: in case any of the contracts of the projects reaching up to 77.8 billion dollars are terminated, the Treasury will assume the resulting debts. The “big taximeter” of the “corporatocracy” even began work on April 19. In other words, the “Assumed Debt Regulations” say: corporations working with the build-lease-transfer or Public-Private Partnership model, have to apply to the Treasury within 15 days and get a number. That is right… The difference between the line in the post-office or hospital, is that citizens do not make a payment to the state, but instead the state makes a payment to a corporation(!).

There is a whole different dimension to this subject: unpublished IMF reports.
When we think of “IMF”, we think of “stand-by”, considered as a loan granted during difficult circumstances. This perception is only natural when we look at our recent history. However, the IMF, of which we are a founding member, regularly examines the economy each year and prepares a report. The reports, named “Article 4”, do not only overpraise. These reports, which also inform about the weak and fragile parts of economies, are usually published on the IMF website. Yet governments have the right for the report “not to be published”. We became aware of this right two years ago, when Deputy Prime Minister Ali Babacan, who was the person responsible for the Treasury, said “we did not let the report be published.” And now we come to find out the unpublished report included a criticism pointing to the fact that the projects commissioned with the Public-Private Partnership model were not announced. Hence, if you keep the economic risks the IMF knows about from the public, statements as “we have nobody to thank” are nothing more than chatter.

To get back to the Prime Minister’s speech (March 8, 2014) about the third airport:
“Can you imagine, the world’s biggest airport is about to be built and they are trying to sabotage it. No, they will not be able to do that. (…) We will set this out and our booming bulldozers will work there. The date I give you is the end of May, beginning of June.”

On this occasion, here is a scoop: Erdoğan, who has a special interest in the symbolic clashing of dates, is considering May 29 for the foundation laying ceremony of the third airport. This way the anniversary of the conquest of Istanbul by Fatih, is supposed to be crowned by the third airport. Nevertheless, the “Assumed Debt Regulations” are not a good sign regarding the provision of that “crown”. I hope we will not remember the “booming bulldozers”, during a booming economic jolt.

Share “The Mystery of the Secret Funds—and—Who are you Fooling?” on: