John Harris
The Guardian, United Kingdom
Brexit is about more than the EU: it’s about class, inequality, and voters feeling excluded from politics. So how do we even begin to put Britain the right way up?

“If you’ve got money, you vote in,” she said, with a bracing certainty. “If you haven’t got money, you vote out.” We were in Collyhurst, the hard pressed neighbourhood on the northern edge of Manchester city centre last Wednesday, and I had yet to find a Remain voter. The woman I was talking to spoke of the lack of a local park, or playground, and her sense that all the good stuff went to the regenerated wonderland of big city Manchester, 10 minutes down the road.

Only an hour earlier, I had been in Manchester at a graduate recruitment fair, where nine out of 10 of our interviewees were supporting Remain, and some voices spoke about leave voters with a cold superiority. “In the end, this is the 21st century,” said one twentysomething. “Get with it.” Not for the first time, the atmosphere around the referendum had the sulphurous whiff not just of inequality, but a kind of misshapen class war.

And now here we are, with that terrifying decision to leave. Most things in the political foreground are finished, aren’t they? Cameron and Osborne. The Labour party as we know it, now revealed once again as a walking ghost, whose writ no longer reaches its supposed heartlands. Scotland – which at the time of writing had voted to stay in the EU by 62% to 38% – is already independent in most essential political and cultural terms, and will presumably soon be decisively on its way.

Sinn Féin is claiming that the British government “has forfeited any mandate to represent the economic or political interests of people in Northern Ireland”. These are seismic things to happen in peacetime, and this is surely as dramatic a moment for the United Kingdom as – when? The postwar datelines rattle through one’s mind – 1979, 1997, 2010 – and come nowhere near.

Because, of course, this is about so much more than the European Union. It is about class, and inequality, and a politics now so professionalised that it has left most people staring at the rituals of Westminster with a mixture of anger and bafflement. Tangled up in the moment are howling political failures that only compounded that problem: Iraq, the MPs’ expenses scandal, the way that Cameron’s flip from big society niceness to hard faced austerity compounded all the cliches about people you cannot trust, answerable only to themselves (something that applied equally to the first victims of our new politics, the Liberal Democrats).

Most of all, Brexit is the consequence of the economic bargain struck in the early 1980s, whereby we waved goodbye to the security and certainties of the postwar settlement, and were given instead an economic model that has just about served the most populous parts of the country, while leaving too much of the rest to anxiously decline. Look at the map of those results, and that huge island of “in”

voting in London and the south east; or those jaw dropping vote shares for Remain in the centre of the capital: 69% in Tory Kensington and Chelsea; 75% in Camden; 78% in Hackney, contrasted with comparable shares for Leave in such places as Great Yarmouth (71%), Castle Point in Essex (73%), and Redcar and Cleveland (66%). Here is a country so imbalanced it has effectively fallen over. 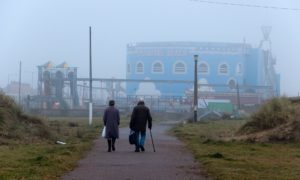 For six years now, often with my colleague John Domokos, I have been travelling around the UK for our video series Anywhere But Westminster, ostensibly covering politics, but really trying to divine the national mood, if such a thing exists. I look back, and find all sorts of auguries of what has just happened. As an early warning, there was the temporary arrival of the British National party in electoral politics from 2006 onwards, playing on mounting popular anger about immigration from the EU “accession states”, in the midst of Gordon Brown’s “flexible” job market, and a mounting housing crisis.

A few years later, we met builders in South Shields who told us that their hourly rate had come down by £3 thanks to new arrivals from eastern Europe; the mother in Stourbridge who wanted a new school for “our kids”; the former docker in Liverpool who looked at rows of empty warehouses and exclaimed, “Where’s the work?”

In Peterborough in 2013, we found a town riven by cold resentments, where people claimed agencies would only hire non UK nationals who would work insane shifts for risible rates; in the Ukip heartlands of Lincolnshire, we chronicled communities built around agricultural work and food processing that were cleanly divided in two, between optimistic new arrivals and resentful, miserable locals – where Nigel Farage could pitch up and do back to back public meetings to rapturous crowds. Even in the cities that were meant to unanimously spurn the very idea of Brexit, things have always been complicated. Manchester was split 60:40 in favour of remain; in Birmingham last week, I met British Asian people who talked about leaving the EU with a similar passion and frustration to plenty of white people on the same side.

In so many places, there has long been the same mixture of deep worry and often seething anger. Only rarely has it tipped into outright hate (on that score, I recall Southway in Plymouth, and loud Islamophobia echoing around a forlorn shopping precinct; or the women in Merthyr Tydfil doing laps of the town centre bellowing, “Get ’em out!” ), but it still seems to represent a new turn in the national condition. “The gentleness of the English civilisation is perhaps its most marked characteristic. You notice it the instant you set foot on English soil,” wrote George Orwell in 1941. Not now, surely?

What defines these furies is often clear enough: a terrible shortage of homes, an impossibly precarious job market, a too often overlooked sense that men (and men are particularly relevant here) who would once have been certain in their identity as miners, or steelworkers, now feel demeaned and ignored. The attempts of mainstream politics to still the anger have probably only made it worse: oily tributes to “hardworking families”, or the the fingers down a blackboard trope of “social mobility”, with its suggestion that the only thing

And all the time, the story that has now reached such a spectacular denouement has been bubbling away. Last year, 3.8 million people voted for Ukip. The Labour party’s vote is in a state of seemingly unstoppable decline as its membership becomes ever more metropolitan and middle class, problems the ascendancy

of Jeremy Corbyn has seemingly made worse. Indeed, if the story of the last few months is of politicians who know far too little of their own supposed “core” voters, the Labour leader might be seen as that problem incarnate. The trade unions are nowhere to be seen, and the Thatcher era ability of Conservatism to speak powerfully to working class aspiration has been mislaid. In short, England and Wales were characterised by an ever growing vacuum, until David Cameron – now surely revealed as the most disastrous holder of the office in our democratic history – made the decision that might turn out to have utterly changed the terms of our politics.

The prime minister evidently thought that the whole debate could be cleanly started and finished in a matter of months. His Eton contemporary Boris Johnson– and, really, can you believe that the political story of the last four months has effectively been a catastrophic contest between two people who went to the same exclusive school? – opportunistically embraced the cause of Brexit in much the same spirit. What they had not figured out was that a diffuse, scattershot popular anger had not yet decisively found a powerful enough outlet, but that the staging of a referendum and the cohering of the leave cause would deliver exactly that. Ukip were held back by both the first past the post electoral system, and the polarising qualities of Farage, but the coalition for Brexit effectively neutralised both. And so it came to pass: the cause of leaving the EU, for so long the preserve of cranks and chancers, attracted a share of the popular vote for which any modern political party would give its eye teeth.

Of course, most of the media, which is largely now part of the same detached London entity that great English patriot William Cobbett called “the thing”, failed to see this coming. Their world is one of photo ops, the great non event that
is PMQs, and absurd debates between figures that the public no longer cares about. The alienation of the people charged with documenting the national mood from the people who actually define it is one of the ruptures that has led to this moment: certainly, wherever I go, the press and television are the focus of as much resentment as politics. While we are on the subject, it is also time we set aside the dismal science of opinion polling, which should surely now stick to product testing and the like. Understanding of the country at large has for too long been framed in percentages and leading questions: it is time people went into the country, and simply listened.

We all know the cruel irony that sits in the midst of all this story: that Britain – or what is left of it – will now take a sharp turn to the right, and the problems that have fed into this moment will only get worse. Well, there we are. History is rarely logical; until it really bites them, a lot of people will probably be more supportive of the kind of super Thatcherism we may well be subjected to than a lot of other people would like. More to the point, if England and Wales have taken a drastic turn towards uncertainty and dysfunction, it will not be the first time. It is a difficult point to make at a moment like this, but politics will – must – go on. If we fear not just what this decision means for our country but how much it says about Britain’s underlying social condition, we will have to fight. But first, we will have to think, probably more deeply than ever.

Orwell wrote his masterful text The Lion and the Unicorn when Europe was tearing itself apart, and the UK’s isolation was more a matter of righteous principle than political chaos. England, he said, “resembles a family, a rather stuffy Victorian family, with not many black sheep in it but with all its cupboards bursting with skeletons. It has rich relations who have to be kowtowed to and poor relations who are horribly sat upon, and there is a deep conspiracy of silence about the source of the family income.”

With the under 25s having so obviously supported one side, and older people the other, the next line is prescient beyond words: “It is a family in which the young are generally thwarted and most of the power is in the hands of irresponsible uncles and bedridden aunts.” And his last line is just as good: “A family with the wrong members in control – that, perhaps, is as near as one can come to describing England in a phrase.”

With Farage crowing and Johnson and Gove exultant, those words take on a whole new power. And for those of us who woke to the most awful news imaginable, they imply a question we should probably have been asking long before this happened: how do we even begin to put England – and Wales – the right way up? Think about that woman in Collyhurst: “If you’ve got no money, you vote out.” Therein lies not just the against the odds triumph of the leavers, but evidence of huge failures that the stunned mainstream of politics has only just begun to acknowledge, let alone do anything about.