We are very proud that Miklós Harastzi was the keynote speaker at the European Press Prize award ceremony, held the 14th of March in Budapest. Read his important speech below.

“Dear friends of freedom of the press,

Many of you are coming from countries where the otherwise democratic, pluralistic media is burdened by novel dangers, such as manipulative fake news, the fragmentation of the public through social media, the monopolistic harnessing of advertisement revenues by the big-data companies, and, as a result, a further weakening of the legacy media.

Now, your speaker tonight is envying you — and at the same time he is praising your wisdom to have come with your award ceremony to one of the countries of Europe already taken over by a higher stage of despoilment.

Your precious prizes honouring quality journalism are truly meaningful in a country which is, by now, beyond the mere spreading of politically motivated fake news. Instead, we have a dominating fake media, sustained by the government from taxpayer money. In short, welcome to the new propaganda state inside Europe, donning a quasi-democratic and quasi-market-economy camouflage.

“Your precious prizes honouring quality journalism are truly meaningful in a country which is, by now, beyond the mere spreading of politically motivated fake news.”

Here you find an audience which can fully appreciate the dangers that the established democracies face when outside forces pump fake news into the public space.

We share your indignation hearing about the most impertinent of all fake news, which is when populist politicians cry fake news, slandering the work of responsible journalists. The honest media has become an enemy because it is NOT fake.

“The honest media has become an enemy because it is NOT fake.”

But what you will experience in this country is not any more manipulations of social media, utilizing commercial algorithms of the big-data companies to distribute their garbage.

Instead, the illiberal propaganda state has become a troll factory itself. Its main objective is not simply the spreading of “alternative facts” – the aim is to squeeze out all alternatives to fake news.

As you can guess, this cannot be achieved within the media production cycle alone. To achieve this, you need fake democracy, a fake market, and fake constitutionalism.

I recommend studying the propaganda state as inherent in the warning signs you already experience at home.

Notwithstanding their camouflage of an elective democracy, these states are able to achieve a deep-seated censorship and propaganda effect, comparable to what the erstwhile totalitarian states had accomplished.

How does it work? Hanna Arendt has told us, and the method has not changed. The essence, she told us, was a concentrated state effort to actually build the fake realities, and then give up on argumentation, and only finger point at that convenient new reality. Think of the fake civil war in Ukraine to convince the public of a “fascist danger”, or the building of the border fence in Hungary, in order to convince the nation that it has to be defended, from the danger of an alien invasion and a fake Soros plan.

Naturally, Hanna Arendt added, for the propaganda state to succeed, it also had to annihilate access to real news. It was one of the most sobering moments of my life when I realized that that method also works in an elective democracy, by the monopolization of broadcasting, and by fragmenting and manipulating the online social media.

In the 1990s, when I served as head of the media freedom watchdog arm of the Organisation for Security and Co-operation in Europe, I was forced to realize that the decline of media freedom went far beyond individual violations of earlier recognized standards. It was a transition from democracy, rather than to it. It was the global resurrection of methodical state censorship in a democratic disguise. This type of media control is globally taking root as a mainstay of illiberal and neo-authoritarian governance.

The quasi-democratic state censorship systems do not generally outlaw free speech, unlike the few remaining ideological tyrannies, such as China or Iran. Nevertheless, the first liberty that is taken away in all post-Cold War fake democracies is the local version of the First Amendment. Take as an example the constitutional changes in EU member states Hungary and Poland.

“The first liberty that is taken away in all post-Cold War fake democracies is the local version of the First Amendment.”

With the help – and under the pretext – of majoritarian parliamentary decisions, they simultaneously curtail all four basic media freedoms:

The forces bent on governing with the help of fake media are already inside the European wall.

They have won elections not only in the US or the post-Soviet states. They have won referenda in the Netherlands and in the United Kingdom.

I can only agree with our prime minister Viktor Orbán when he treats his new system as a model for all nations in Europe: except his dream is my nightmare.

In 2010 he claimed an electoral revolution had washed away the chaos of liberal democracy — declaring instead a System of National Cooperation — and officially obliged all state institutions to visibly placard that name on their walls.

It only took four more years for him to categorize his new system as an “illiberal democracy”, borrowing Fareed Zakaria’s term, created in 1997 to describe a new way of dismantling democracy. Orbán in 2014 reinterpreted the term as meaning real democracy after decades of western mental imperialism, and named Russia and Turkey as its pioneers.

Here is what he has done in the years since coming to power, demonstrating how fragile our beloved media freedoms are. He:

–  passed a one-party Constitution, against the will of all other parties, only 25 years after the fall of Communism;
–  packed the Constitutional Court
–  passed a media law which put the regulation and licensing of all the media in the hands of an untransparent Media Council with 5 people on board, delegated solely by his party;
–  transformed the media markets as well, by overtly passing taxpayer money to chosen oligarchs, tasked to buy up independent media and turn them into government mouthpieces.
–  symbolically, and sarcastically, he made the Mayor of his native village and casino magnate of his choice, the owners of all of the countryside print media. Neither of the two oligarchs had anything to do with the press before 2014;
–  directed the quasi-totality of state advertisement to the government’s media oligarchs
–  overnight obliterated from existence the country’s best newspaper, Népszabadság, just when it had become a powerful investigative team;
–  made the public service media and the state news agency into a department of the government;
–  just barely a half a year ago, he practically banned the last free offline media – the public posters, so crucial for free elections – by passing a law that made their regulation the jurisdiction of the municipalities, overwhelmingly led by his party.

Dear friends, with this litany I did not mean to give another demonstration of Hungarian pessimism. And it was certainly not meant to dismiss as lightweight the dangers looming over the media of more established democracies.

On the contrary, I wished to stress our common experience that democracy’s institutions must sooner or later get into trouble if the trust in the media is shaken. I wished to assure you that in this country, however heavy the assault of illiberal populism and crony capitalism, the trust in a shared sense of media freedom is alive and ready to strike back.

“The trust in a shared sense of media freedom is alive and ready to strike back.”

It is good to hear that many editors and journalists in the world have started to develop the tools and the cooperation necessary to defend real news and journalistic ethics.

Your prestigious award is one of those tools. We need to celebrate the heroes of free and professional journalism. Free speech was the beginning of democracy, and it is also its finest product. Today, the media are the ultimate frontiers in defending freedom in society.

We need not wait until the traditional political process is no longer able to put speech freedoms and checks and balances back to work – as happens under fully-fledged illiberal regimes.

Please give special attention to the investigative arm of the “artillery of the press”. Illiberal media governance sometimes does not mind the proliferation of opinions, but their nemesis is facts about corruption and human rights abuses. Please also defend the institutions that enforce transparency and justice.

And let me finish this by paying tribute to the brave investigative journalists of Slovakia, who at the price of their own lives gave us a lesson about the force of fact-finding journalism. Just as did the Slovak nation, with their mass protests against the mere possibility of turning the republic into a nepotistic fiefdom.

And now let’s greet the European Press Prize awardees of 2018.”

Miklós Haraszti  is a Hungarian journalist, human rights advocate, university professor and writer. He served as OSCE Representative on Freedom of the Media  for four years. In 2012 he was appointed UN Special Rapporteur on the situation of human rights in Belarus. As a professor at Columbia Law School and the Central European University, Miklós Haraszti lectures on democratisation and media politics.

Photo made by Daniel Vegel 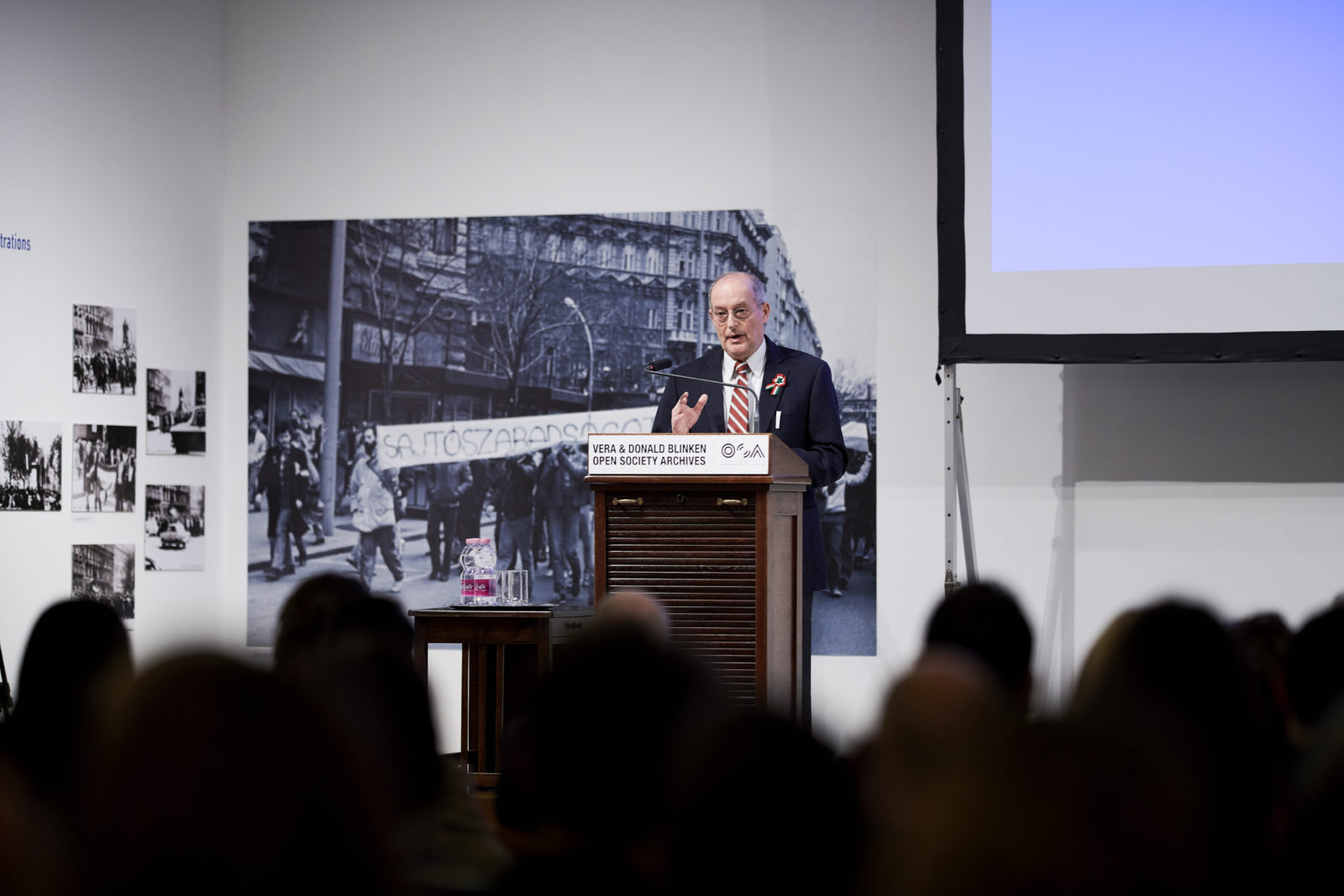